History
Growth
The Daytona Beach Fire Department (DBFD) has a long and storied history. After the first big fire in 1898, several influential citizens formed a

volunteer fire department. In 1902 the city purchased its first chemical fire engine. In 1909 the first paid fire chief, Henry T. Titus was hired. By the end of that year Charles Messing replaced Titus and was overseeing a department with about 65 volunteers. 1909 was also the year that the first water system was installed. The Water Works and the tower on Magnolia Avenue were erected. DBFD has continued to improve on the water system since that time and it has proven to be a valuable asset to the fire department.

Alarms
In the beginning, the Light Plant Whistle served as the fire alarm. The amount of blasts determined in which district the fire was. Ten years later, a bell tower was placed near the Fire Station. Today, DBFD uses a central dispatch center at the Volusia County Sheriff's Department that receives the call from the 9-1-1 caller. Dispatchers then notify the proper crews through a special line at the fire station.

Equipment
The first motorized equipment arrived in Daytona in 1913. In the early 1930s DBFD had seven pieces of motorized equipment. At this time, there were 16 paid men and three fire stations. In addition, during the 1950s, an aerial ladder truck arrived and a 90-foot radio tower was added to the main station. Today, DBFD has 26 pieces of equipment including five motorcycles.

Stations
One of the five fire stations mentioned was at the airport. This station was given over to the county. Then, in the 1970s, a fire claimed a 31 year-old man’s life. A train caused a delay in the firefighter’s arrival. At the time, there was only one fire station on the west side of the railroad tracks. This event prompted the building of the fire station at Mason Avenue and Jimmy Ann Drive. Today, there are seven fire stations covering continually expanding Daytona Beach.

Consolidation
There have been a few complex changes in the status of the Fire Department. In the mid-1970s, city management implemented a cross-trained Public Safety Department. This combined the police and fire departments into one department. This system was costly and cross training lowered morale. So, fire and police separated into their own departments.

Again in the early 1990s, city officials wanted a combined Public Safety Department. This time they did not ask for cross-trained employees. Instead, the Fire Department just fell under the authority of the Police Chief with a Commander of the Fire Division under him. This only lasted until 1996 when the police and fire departments were once again separated. 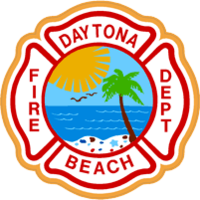