USA Gymnastics is the national governing body for the sport in the United States. It gets this designation from the U.S. Olympic Committee and the International Gymnastics Federation. Based in Indianapolis, the organization is committed to creating a culture that empowers and supports its athletes and focuses on its highest priority, the safety and well-being of the athletes. USA Gymnastics sets the rules and policies that govern the sport of gymnastics, including selecting and training the U.S. Gymnastics Teams for the Olympics and World Championships; promoting and developing gymnastics on the grassroots and national levels, as well as a safe, empowered and positive training environment; and serving as a resource center for members, clubs, fans and gymnasts throughout the United States. USA Gymnastics also provides continuing education resources for new and experienced coaches, instructors and professional members. USA Gymnastics encompasses six disciplines: women’s gymnastics, men’s gymnastics, trampoline and tumbling, rhythmic gymnastics, acrobatic gymnastics and gymnastics for all (aka group gymnastics).

USA Gymnastics is committed to creating a culture that empowers and supports our athletes. The organization has and will continue to take specific and concrete steps to promote athlete safety and prevent future abuse by vigorously enforcing the USA Gymnastics Safe Sport Policy, which requires mandatory reporting; defines six types of misconduct; sets standards to prohibit grooming behavior and prevent inappropriate interaction; and establishes greater accountability. Other efforts taken to strengthen that commitment include establishing a dedicated, toll-free number (833-844-SAFE), the safe sport email address (safesport@usagym.org), and online reporting to simplify the process for reporting; building a safe sport department that is developing a comprehensive education plan for members; and adopting bylaw amendments to provide the basis for further developing our safe sport programs and governance. The Athlete Assistance Fund, established by the National Gymnastics Foundation, provides financial resources for counseling services for any current or former gymnast who was a member of USA Gymnastics and suffered sexual abuse within the sport of gymnastics.

The 501(c)(3), not-for-profit organization was established in Tucson, Ariz., in 1963. The first Board of Directors began the time-consuming task of creating a viable national program for gymnastics in the United States. During the mid-1960s the United States had scarcely 7,000 athletes competing a limited schedule. The only major international events for gymnasts were the Olympic Games and the Pan American Games. Due to the hard work of U.S. gymnastics pioneers, such as Frank Bare, George Gulack, Dean McCoy, Gene Wettstone and Arthur Gander, USA Gymnastics, formerly doing business as the U.S. Gymnastics Federation, gained membership into the FIG in 1970, opening the door to numerous opportunities for U.S. gymnasts. In the last 50-plus years, the sport has grown consistently.

Today, more than 200,000 athletes, professionals and clubs are members of USA Gymnastics. Throughout the year, USA Gymnastics provides educational opportunities for coaches and judges, as well as gym club owners and administrators, through regional Congresses, the National Congress and Trade Show, and USA Gymnastics University. Approximately 4,000 competitions and events throughout the USA are sanctioned annually.

Beginning in June 2018, USA Gymnastics is governed by a 15-person Board of Directors that provides long-term strategic planning. The Board consists of: eight independent directors; three athlete directors; three national membership directors; and one Advisory Council representative. The officers are also members of the Board.

Here’s a brief overview of how the breakdown of athlete, national membership and Advisory Council directors was determined.

When the Board moved to 15 members, the Programs Council was created to provide a forum for all five of the competitive disciplines to discuss and provide input on issues of importance to the programs and for the organization’s culture and future. The Programs Council is comprised of two representatives from each of the five competitive disciplines, who are elected by votes cast by the respective professional membership, and one independent director, who is appointed by the Board chair.

Our Role In The Olympic Family

The International Olympic Committee was created by the Congress of Paris on June 23, 1894, and was entrusted with the control and development of the Modern Olympic Games. The IOC is the final authority on all questions concerning the Olympic Games and the Olympic Movement.

(FIG) is recognized by the IOC and is responsible for the governance of the sport of gymnastics on the international level. The FIG establishes the rules on eligibility that each country with a national gymnastics federation must follow. Nearly 130 countries are members of the FIG. USA Gymnastics became officially recognized by the FIG in October 1970.

The U.S. Olympic Committee, headquartered in Colorado Springs, Colo., since 1978, is comprised of 78 member organizations, including USA Gymnastics. The USOC is recognized by the IOC and is responsible for the U.S. Olympic Team and Pan American Games Team. It is the guardian of the U.S. Olympic Movement.

Gymnastics And Its Athletes

USA Gymnastics has a variety of programs for all ages and skill levels from grassroots to advanced. USA Gymnastics strives to provide a positive learning experience for those interested in the sport of gymnastics.

At the grassroots level of gymnastics, USA Gymnastics plays a significant role. Gymnasts at this level take classes at a local USA Gymnastics member club, YMCA or YWCA, parks and recreation facility or in physical education class in school. Gymnastics is an extraordinary sport that develops flexibility, strength, grace, discipline, control, coordination, goal orientation, confidence, creativity, leadership, a healthy body and positive self-esteem. Through hard work and dedication, gymnasts can improve their abilities and possibly even represent the United States in major competitions. Athletes’ goals and objectives vary when participating in the sport of gymnastics. Different goals for gymnasts include participating in a weekly gymnastics class for fun and recreation, performing in exhibitions, competing for a high school team, competing in a Junior Olympic program, earning a college scholarship, or even making a World Championships team. Nearly 4,000 USA Gymnastics sanctioned meets a year are conducted with gymnasts grouped on the basis of age and ability.

In addition to junior and senior national teams, the men’s, women’s, rhythmic and acrobatic gymnastics and trampoline and tumbling programs each have a Junior Olympic and elite development program. All the programs benefit from developmental training programs conducted by USA Gymnastics.

The junior and senior national teams feature a designated number of gymnasts for men’s, women’s, rhythmic, acrobatic gymnastics, and trampoline and tumbling,.  Members of the national team are selected based on performances in the all-around at the national championships or through an alternative system established by the respective program.

The men’s national team has 28 senior and junior elite members.  The junior national team is broken into two age groups, 14-15 and 16-18.  The number of junior and senior members fluctuates depending on the timing within the Olympic cycle.  The men’s senior national team is selected after the Winter Cup and the U.S. National Championships, based on performances at the event, points earned through the points-evaluation system and other factors considered by the committee.  For the most part, the junior team members are chosen based on performances at the U.S. National Championships.

For the men, the Future Stars program is designed is to identify talented athletes and to get them started on the right developmental path to national and international success. The program uses a special competitive routine format to evaluate the skill, strength and flexibility development of the athlete. The Future Stars National Championships features the best 10-, 11- and 12-year-olds in the United States who perform special Future Stars competitive routines. Based on the results at the championships, USA Gymnastics identifies the Future Stars Developmental Team, which includes the top 18 gymnasts in both the 10- and 11-year-old divisions and 14 gymnasts in the 12-year-old division.

Gymnastics for All (GfA) is an activity for all ages and all ability levels. Groups ranging in size from less than 10 to several thousand people perform exhibition routines that use elements from artistic gymnastics, rhythmic gymnastics, aerobics, dance, jazz-dance, folk dance, mini-trampoline, and much more. There is also a GfA competitive division that is called TeamGym. In TeamGym, squads of athletes compete in events that involve tumbling, vaulting, mini-trampoline and group floor exercise. Every four years, USA Gymnastics participates with an official delegation in the World Gymnaestrada. This FIG event features more than 20,000 participants from all around the world. 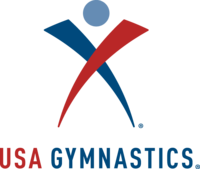