St. George, the great among the martyrs, was born in Cappadocia;
his father's name was

Anastasius, and his mother's name was Theobaste. When he was twenty years old, his father

died, and he went to Emperor Diocletian to take over his father's position. He found that the

Emperor had apostatized the faith and ordered the worship of idols. George was sorrowful, and

he gave all his wealth to the poor and needy and set free his slaves.

When he saw the edict of the Emperor against the Christians, he became raged and tore it.

They took him before the Emperor, and he cried in their middest saying: "For how long you

shall pour your anger against the innocent Christians, and force those who know the true faith

to adopt the faith that you are in doubt of because it is fraudulent? So, either you believe on this

true faith, or at least do not disturb with foolishness those who are steadfast in it." The Emperor

asked Mephnanius, one of his ministers, to pacify and persuade him. He asked him: "Who

taught you to be daring like this." The Saint answered: "It is the truth," then started to explain it

to him. The Emperor interrupted, reminding the Saint with the ranks that he bestowed on him,

and promised him with more if he denied his Christ. The Saint refused with pride all these vain

propositions. The Emperor tortured him severely, but the Lord strengthened him and healed all

When the Emperor was weary of torturing him, he brought a magician, whose name was

Athanasius, who gave the Saint a cup full of poison to drink. St. George made the sign of the

cross over the cup then drank it. When no harm came upon him, the magician believed in the

Lord Christ, and received the crown of martyrdom. The Emperor became raged and ordered to

squeeze him until he delivered up his soul, and they cast his body out side the city.

The Lord Christ raised him up, and the Saint returned to the city. When the people saw him,

three thousand and seven hundred souls believed. The Emperor ordered to cut off their heads

and they received the crown of martyrdom.

When St. George stood before Emperor Diocletian, along with seventy kings that were

sitting around him, they asked the Saint: "We wish you to make these chairs that we are sitting

on to put forth leaves, and bear fruit." The Saint prayed to the Lord Christ, the Lord accepted

his supplication and the chairs put forth leaves and bore fruit.

They took him once to a cemetery and asked him to raise the dead therein. He prayed to the

Lord Christ. The Lord raised them and after they talked to them, they returned to their graves

A poor woman, brought her son, who was blind, deaf and dumb, he prayed to the Lord

Christ then made the sign of the cross over him, and he was healed right away.

Diocletain, during all that, went on torturing St. George, until he was weary and bored of

that. He started to be pleasant to the Saint and promised to give him his daughter in marriage if

he would offer the incense to his gods. The Saint pretended that he accepted his offer, and the

Emperor rejoiced and brought him into the royal palace. While St. George was praying the

Psalms, the Empress heard him and asked him to explain to her what he had said. He began to

Christ, and his words entered her heart and she believed in the Lord Christ, to Whom is the

The Emperor ordered to call upon all the men of the city to gather, in order to see Saint

George offering the incense to the Emperor's gods. When multitude gathered by the idols,

the world. The earth opened its mouth and swallowed all the idols. The Emperor and all those

who were with him were ashamed and he returned to his palace full of fury and wrath. The

Empress told him: "Didn't I tell you not to oppose the Galileans, for their God is strong and

mighty?" The Emperor was exceedingly wrath with her, for he knew that St. George had

brought her also to his faith. The Emperor with rage ordered to comb her body with a steel

comb, then cut off her head, and she received the crown of martyrdom. Finally, Diocletian

decided to put an end to the humiliation that befell him, so he ordered to cut off the head of St.

George, and he received the crown of martyrdom in the year 307 A.D. A Christian took the

body, wrapped it in expensive shrouds, and took it to the city of Lydda, his home town, and

they built a great church on his name there.

May his prayers be with us and glory be to God forever. Amen. 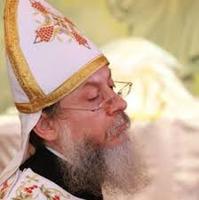